The best defender among those that formed my shabby defense line last season, Ivan Khomkha was sold for a healthy profit. Along with Radik Khairullov and Valery Tskhovrebov, I basically sold my whole defense line. To compensate for that, I also brought in new defenders. 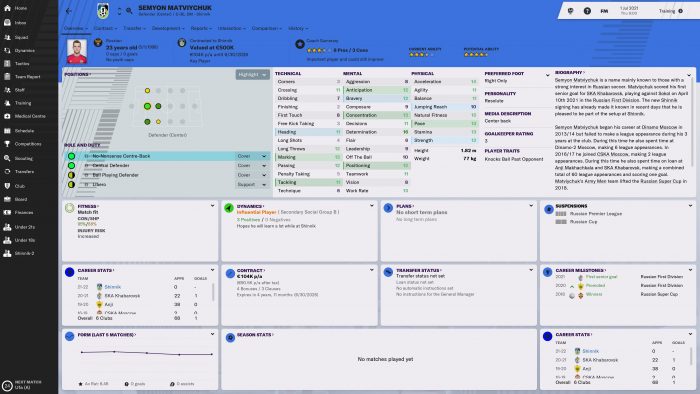 Khetag Khosonov has been a great playmaker this season. Late this season I try to train and use him as an attacking central midfielder, since the playmaker concept is a bit old fashioned. In one game it would work greatly, but in another game the playmaker might be completely shut up if the opponent sets the tactics properly.

I want to make everyone more or less able to create chances, and it means that I should not stick one player to the playmaker position.

Anyway, I have digressed. Khosonov is brilliant. 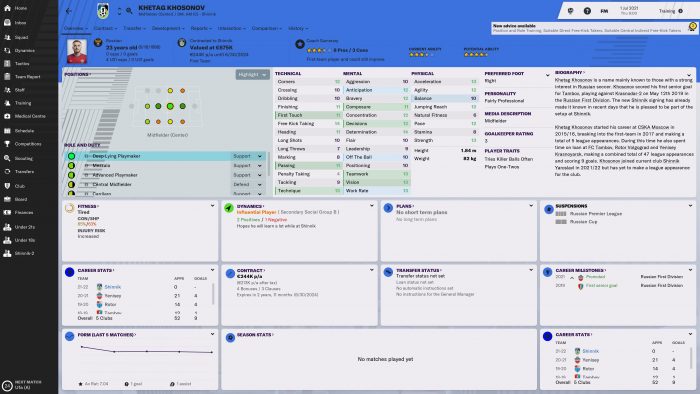 And finally, Maxim Chernyshov. Stories say that when my scout asked him (in Russian) if he preferred to cut inwards or outrun from the outside, he answered, “what?” He is a player who is equally adept at using his two feet, and he can play either role equally well.

I, at first, was confused by this and gave him few chances, but later the season it became apparent that he is obviously my best wide player. 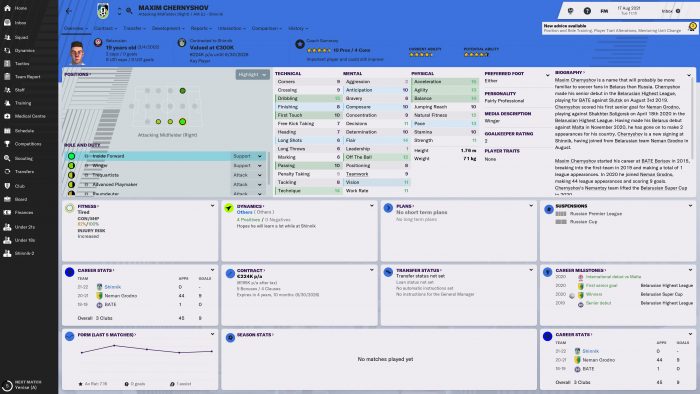 The youth intake just gets worse and worse.

From what I read from various sources, the game handles youth intake thus:

Thus, if I get worse and worse players despite keeping the same Heads of Youth Development and the ratings, and Russia as a whole does not decline in the footballing world, it must mean that other clubs have improved their youth recruitment ratings.

In other world, we are beaten in the advertisement competition. 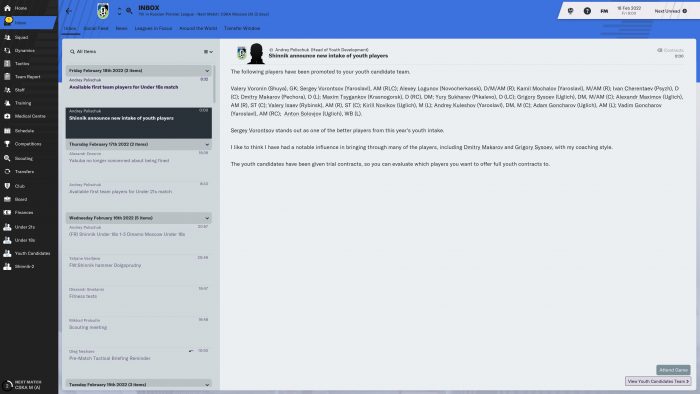 The better players among them are Sergey Vorontsov, Vadim Goncharov and Dmitry Makarov. 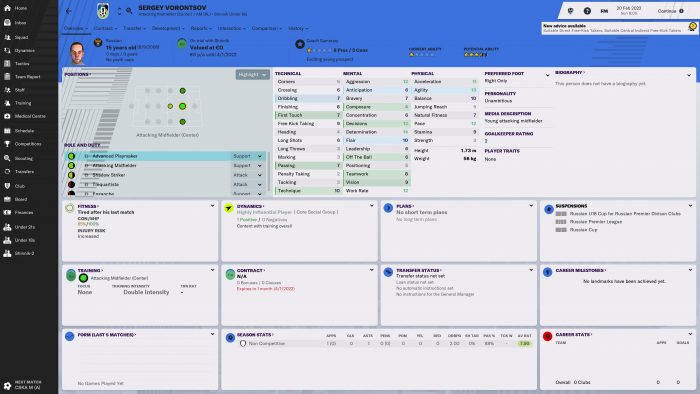 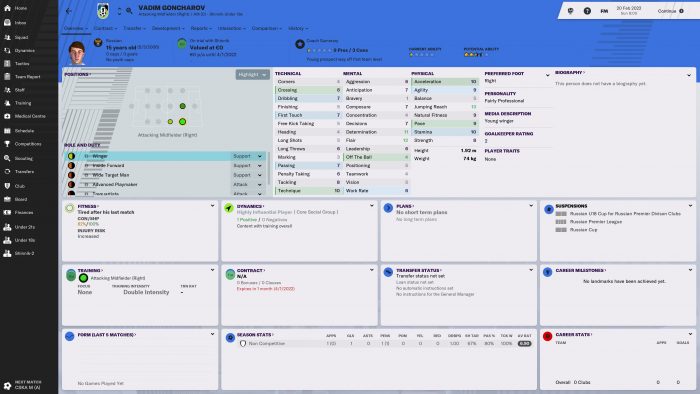 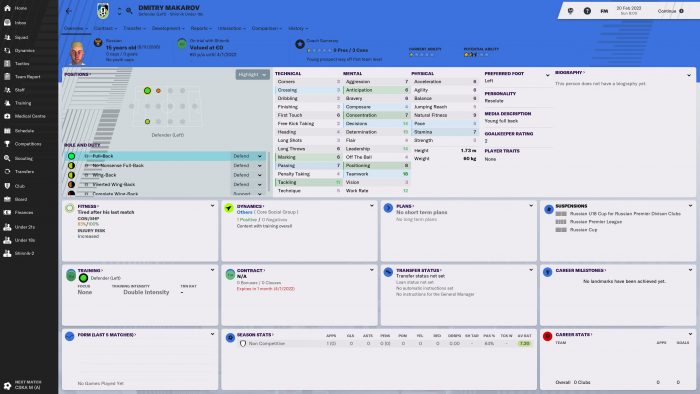 We reached the 6th place in the Russian Premier League, though a EURO cup place is quite far from reach. 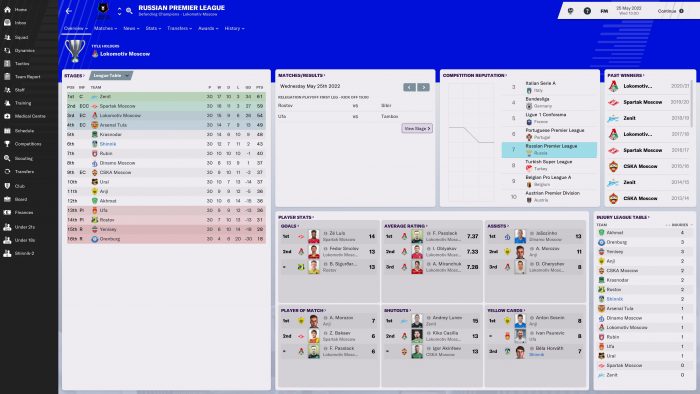 The B-team, which is technically delegated to its own head coach, also performed well. Note that as a B team it cannot promote from the third level, so I do not have incentive to move good players into it. Keeping it there is useful though. The best eleven sees little change besides the addition of Horváth. And indeed, Horváth has been such a huge success. The Hungarian has become a fan favorite, defended well and provided 4 assists this season.

The top scorer again has only scored 5 goals, this time by Dyadyun. 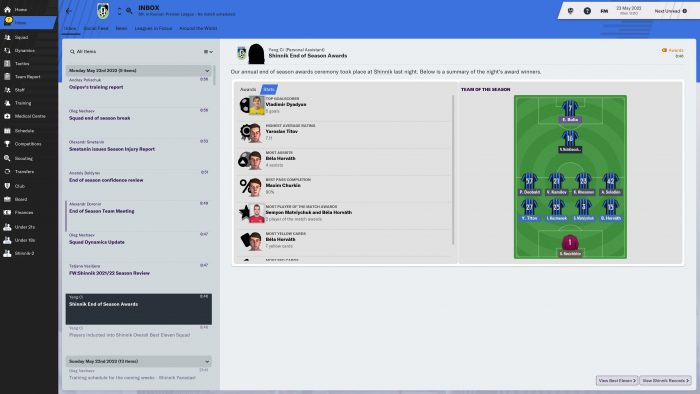 Béla is already very good and had little development in most attributes. However, he gained a whole 3 points of determination in this season.

Yaroslav (a nice name for our team, by the way) has become faster, more determined, better at marking and positioning himself, and simply better in all aspects. 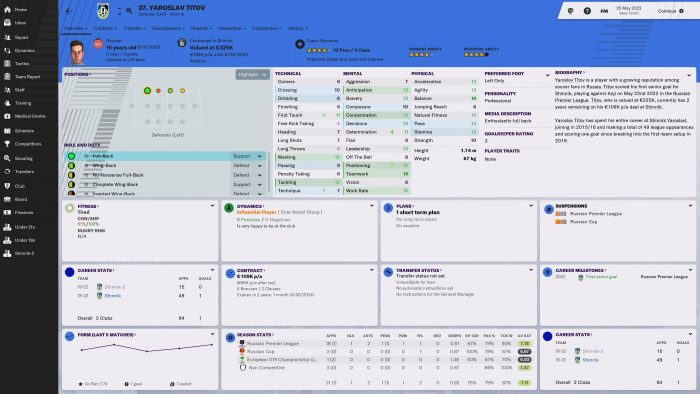 Churkin has also improved his determination by one point and moderately improved in all aspects. 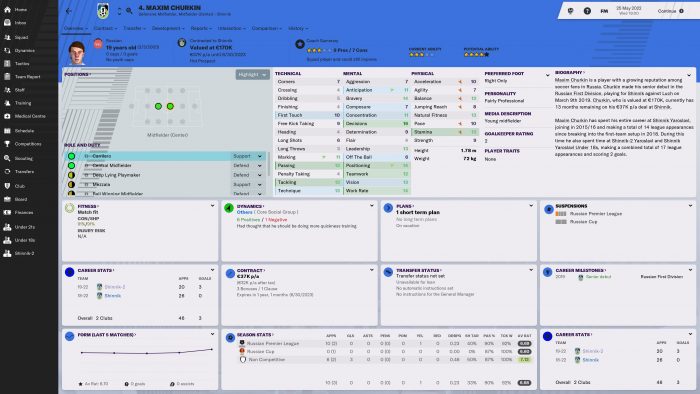 Novichikhin, Khosonov, Matviychuk and Terekhov all lost some determination and did not see major improvement either. But as they (except Novichikhin) needed some time to adapt to my team, their actual performance is better than when they first joined us.

The payroll gets higher and higher, but at the same time our income steadily increases and the prize money is also increased due to the good performance. Overall, the financial outlook is stable, but we do lack money to improve facilities or youth recruitment (which has been an embarassment for seasons). 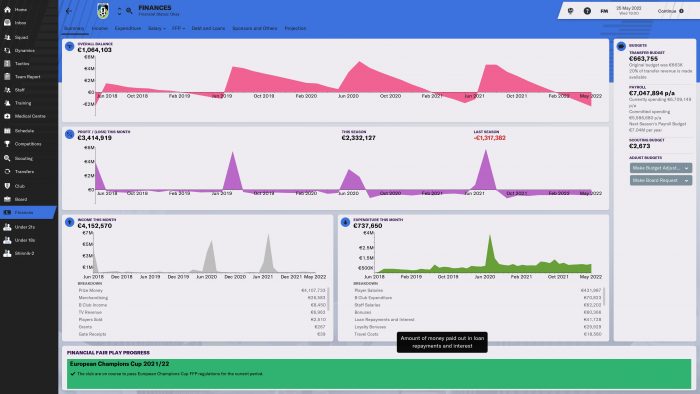 I have been looking at the social groups every now and then, however, it has usually been one core group and one secondary group consisting of new players. This time, however, I have three pretty stable social groups: the core “fairly professional” group, the secondary “balanced” group, and another secondary “Belarusian” group.

Obviously, the “fairly professional” group is the most important one, as I want a core of high professionalism. However, members of the second group actually holds more influence. While Cherevko is still my captain, his lack of playing time has caused a reduced status.

I like this aspect of game. Signing a player is a consideration in so many aspects. You want not only high ability (or potential) and tactical suitability, you also care about mentality, and how they blend socially with other team members. 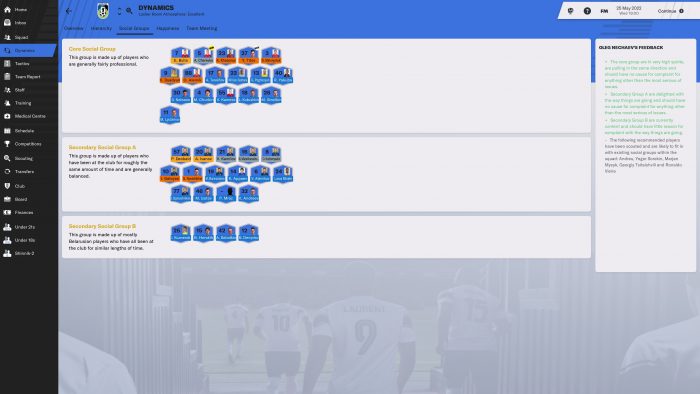 This is the first season in the premier league where the end-of-season meeting ended in a consensus that we will not be relegated next season. Higher expectations come from solid performance, better squad depth, but it also means harsher treatment if I fail to meat the expectations. Perhaps another narrow escape like it happened in Season 3 would not fare well for me!