Yeah. The first season is finished. The nature of amateur football dictates that even if I control the manager, I have absolutely no power to prevent other teams from signing my players. The total monthly expenditure of the whole club is nearly zero, since everyone essentially works for free — or “for the love of football”. After all, “Amateur” used to mean “lover”.

Realistically, though, amateur footballers should be very wary of moving in long distance. After all, being amateur means that they are either students or have another job. No matter how much they love football, they need to live and that should put a constraint on how often they are willing to move to another city.

OK. I should stop with these complaints. I am playing a custom database after all. It’s not official.

The last post mentioned Boukhari, Netteb, Sporkslede, Balkestein and Jörns. Unfortunately, early in the season Boukhari was signed by another team with higher reputation, so I had no chance to actually use him in a single match. And with the signing of a slightly better assistant manager, it turned out that Balkestein and Jörns were not as good as their initial rating look like.

The addition of Giel Piereij was trickier since he wasn’t that proficient as a striker and I didn’t have a place for a attacking right midfielder. After a few matches, it became obvious that I should fit my formation to my available players instead of the other way around, and now I play an asymmetric 4-3-3 formation to accommodate for Piereij.

While the signing of the above two players were immediate success, Luiza had a much less impact. His super low determination proved to be detrimental as part of the social group, and he was too injury prone to contribute anything consistently.

The youth intake was probably brokenly strong for this level. Why do amateur clubs have youth intake even. Anyway, no complaints for a custom database.

The cream of the crop were Maurice van der Wal and Rico Bosma. Also, Bosma was the first decent central midfielder in my team.

Among the late season joiners, Muhammed Nouri was the most useful. He and Beckers are also the only forwards in my team with decent finishing rating, a rare ability at this level to be sure. Why are low level forwards so often Poachers though?

I end up with the 4th place. As the first place is automatic promotion and the second and third places are promotion via play-offs, 4th place is basically the best place of earning nothing. However, I actually spent most of the season sitting in mid-table, so ending at 4th is definitely an encouraging message. 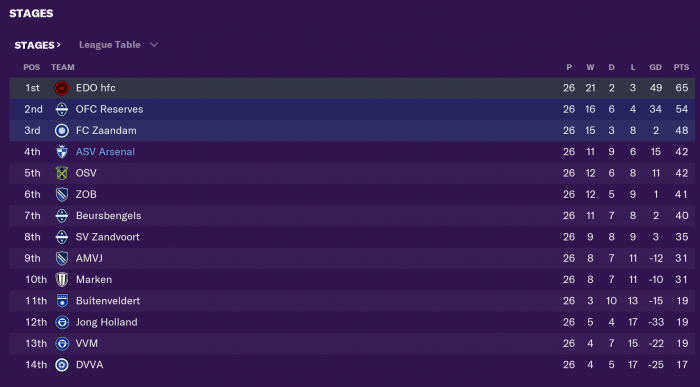 Some final thoughts. In this season long shots are crazily accurate and tend to score. I am not sure if it’s an engine thing or an amateur thing. But I have to admit that in low level matches, the attacking players often have hilariously long time to prepare for a long shot, so maybe that success rate is not that unreasonable. Still, this differs a lot from my stereotype about “low level league = strength, pace and jumping reach”. There are definitely much more subtleties to that!

The fans have different opinions than me and the various coaches about what players are the most valuable ones though. Mats Lagas (a late screenshot by the way) and Salah Jongebloet are their favorites.