As Football Manager 2019 was on sale I bought it. To my disappointment, however, it was the first version that does not support Linux in the recent years.

Anyway, complaints be complaints, I will start my first game.

WIth Steam Play, which is a modified and integrated version of Wine, Football Manager 2019 is still able to run under Linux.
However, just like back when one plays games under Wine, random parts of the game will cease functioning, which is annoying.

And even for parts that still work, the paths and conventions can be very inconvenient for Linux users. For example, I discovered that my cloud saves are put under the following path:

And when I install a custom database I need to install it here:

Yet, when I want to delete those fake names, I need to visit a third place. That places happens to be the same as the old Linux versions though, so there is some relief.

What does not work

So far the only thing that does not work for me is the tactics preset. However, I really want to have a look at the presets even if I know I am going to tweak them beyond recognition soon. For it my plan is to copy the save to a Windows installation, play it for ten minutes or so to see what’s going on for all those presets, then leave and continue under Linux.

This time I start with an amateur club, ASV Arsenal in Netherlands. This way I could say I am playing Arsenal.

Fittingly, I need to set myself to a weak profile. Still, I have enough points to afford a perfect attacking score and a decent determination. Everything else will be joke-leveled. 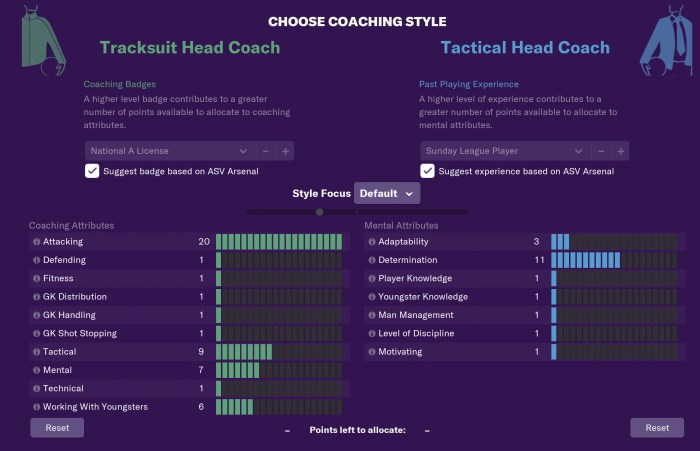 The starting team consists of three real players (Omar Boukhari, Xavier Netteb and Justin Sporkslede). By signing the grayed out players, however, I am also able to find randomly generated Sem Balkestein (from reserves team) and Rini Jörns (from U19; why do amateur clubs have U19 teams though?).

And here are their start-of-season stats.