This is part III of my Clanricarde game. It includes the first conquests outside Éire.

By finishing the “beyond the Pale” mission, which I now already qualify for, I could lay permanent claim on all traditionally Celtic regions in Britain. 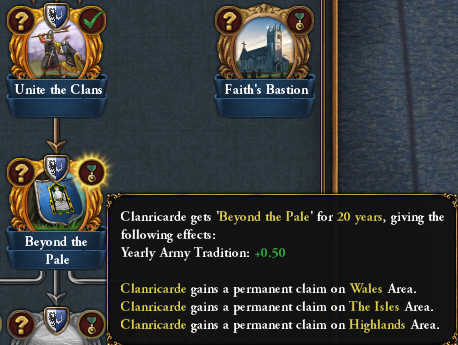 However, that would mean that I get claims on my closest ally, Alba. Thus, it is a big no-no for now. Stabbing the ally who just saved my country is probably not the most moral move. And since Britain is an island, I do not have any replacement for Alba anyways.

On the other hand, the last war definitely ruled out any possibility I can cooperate with Saxain. They hated Clanricarde, for we had taken their lands. Theoretically, all Irish lands should be under Saxain overlordship. But that last war showed to the world how far from reality the Saxain’s de jure claim was. Anyway, Clanricarde needed to declare a rival, and Saxain was the obvious choice.

On a side note, Saxain lost the Isle of Mhanann to the reestablished title Duchy of the Isles after losing another war with lowland countries. 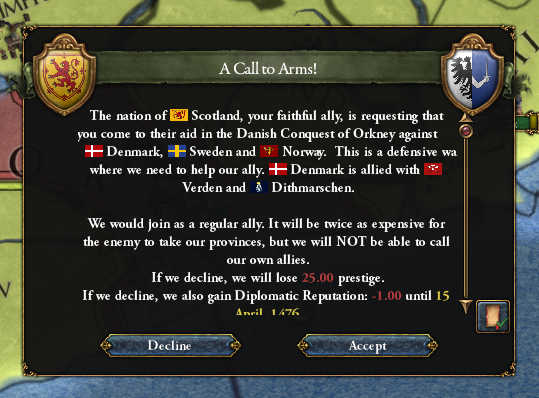 Danmhairg invaded Alba, who called for our help. Eager to maintain the alliance, we entered the war.

But the previously brave Alba army was completely clueless in this war. They avoided pitch battles and engaged in siege warfare which they thoroughly lost. Also, their navy lost to that of Danmhairg, and could not even reach the war goal, Inse Onc.

Thus Alba lost the war. To make things worse, they agreed the condition to break alliance with us. While we were keen to rebuild the alliance, apparently Alba was not satisfied with it and declared us as new rivals. 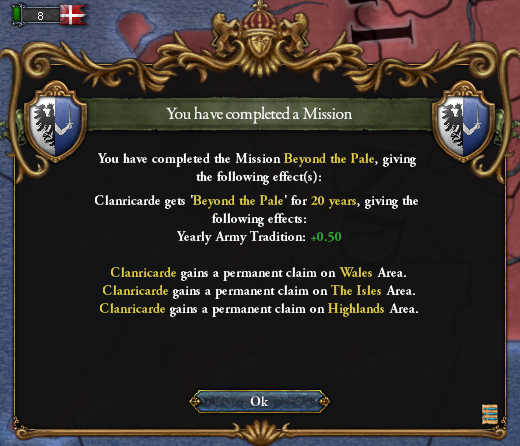 Our answer is pressing the previously held back claims.

Alba immediately conquered the Isles, but could not hold long: soon, the rebels reestablished the duchy. 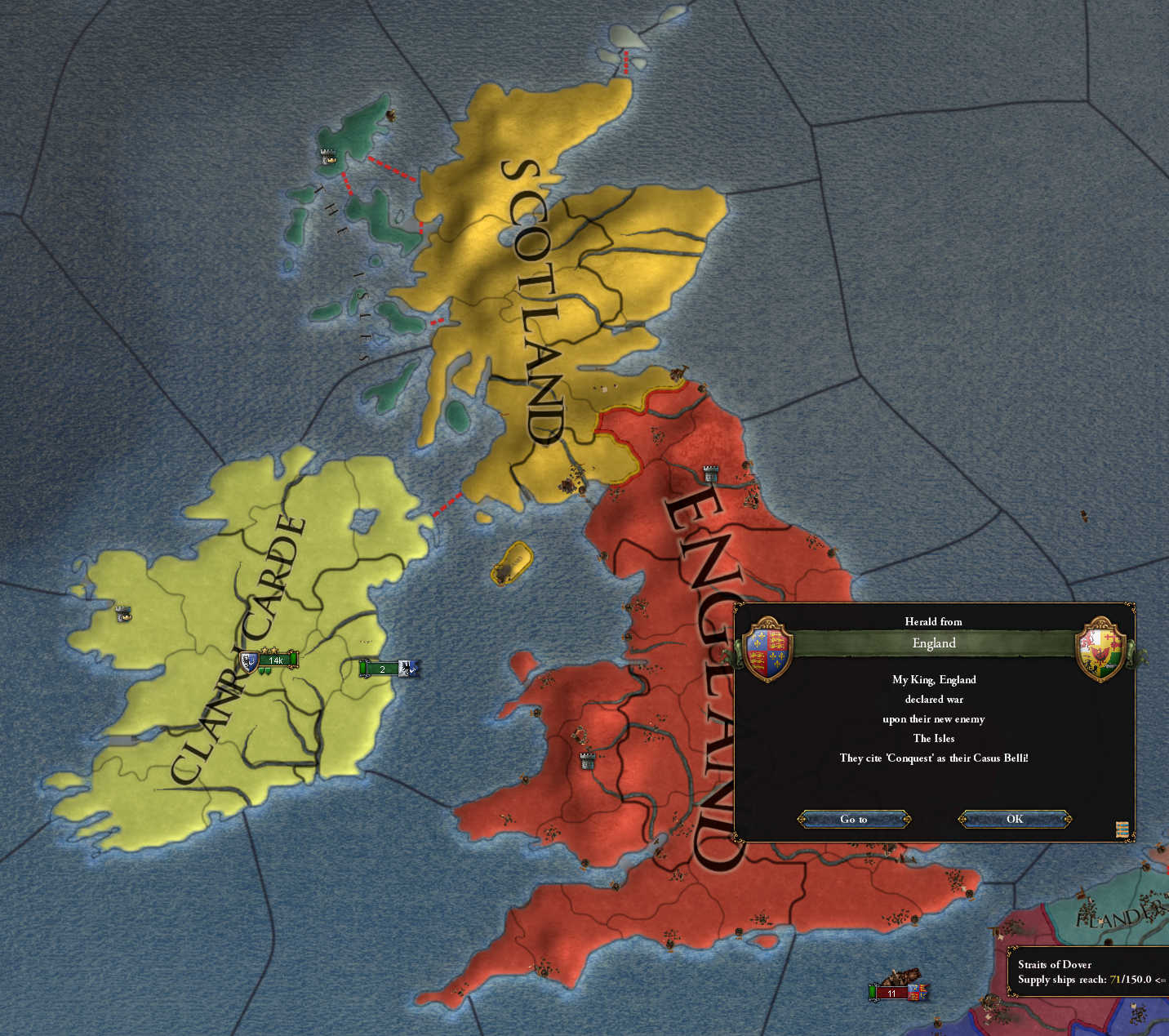 Saxain then declared war on the Isles. Giving how fragile the power of balance on the British islands is, there was no choice but to help the defenders. Thankfully, Clanricarde has now fully recovered from the financial crisis.

Under the command of the genius general Donal Ó Birn, waves of Saxain landing armies were wiped out.

However, due to the lack of navy strength and Alba support, the war ended in partial failure. The Duchy of Isles ceded Oileáin Siar, or “Outer Hebrides” to them.

Soon, Alba also declared war on the Isles, and we again joined the defensive side. This time, we won the war for real, and signed a separate peace for ourselves. 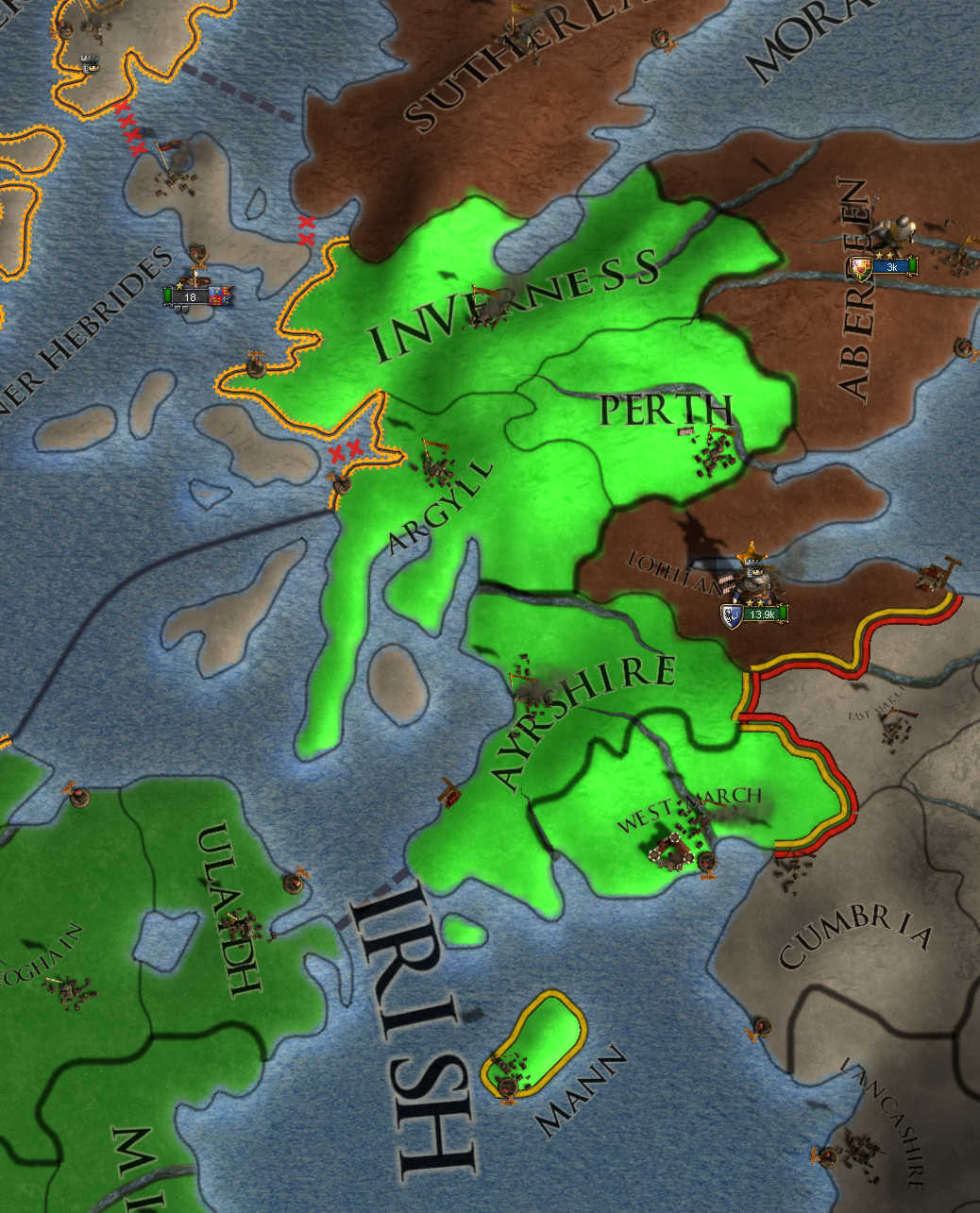 Alba proceeded to conquer the Isles after ceding the western provinces to us.

Among the many pieces of advice for making the country better, Ulick Fionn Burke decided to strengthen ties with nobles. The decision had surprising consequence for his own dynasty though.

Tadhg V Burke was enthroned in 1482. He was adequate, but not terribly popular. Some people said he was actually a production of an extramarital affair.

Naomhán Donnchadha, a local noble connected to the ruling house via some recent political marriages, in contrast, received support from most nobles. His family line was descended from Donnchadh mac Domhnall, the 11th century king of Laighin and Duibhlinn. Naomhán was no better a ruler than Tadhg, but sometimes the popularity matters more. 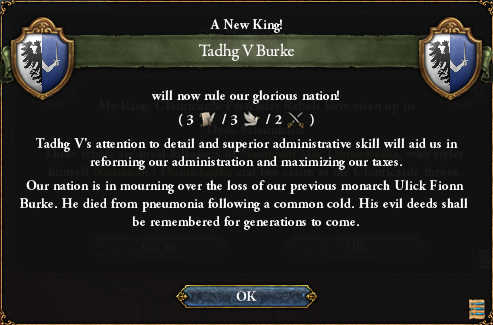 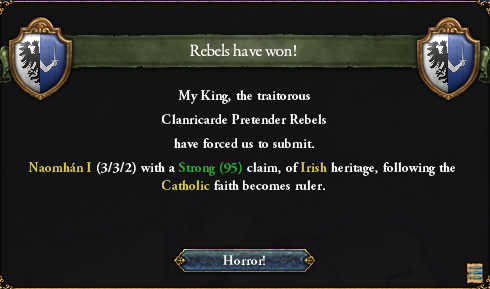 Clanricarde declared war on Saxain when Spáinn is available as an offensive ally. However, the famous armada was powerless in front of the Saxain navy, and as a result, the land fight was basically locked between Clanricarde and Saxain. To make things worse, Saxain did have allies too, and their allies were free to bring troops on the islands.

Fortunately, when the war was going to look badly, Fhrainc joined under the promise of land. Fhrainc’s navy was no match for Saxain either, but Fhrainc has land route to Saxain’s allies, who were completely exposed since most of their army were in Britain.

Just about the time the Clanricarde army was absolutely trashed, Saxain’s allies begged for a peace too. Thus Clanricarde managed to secure a white peace.

Both Clanricarde and Saxain realize that in future wars, Saxain would be able to deny any assistance from the seas. It seemed that the only way Clanricarde would win would be having a strong enough army to beat Saxain and its all allies.

Since even the defensive war plan relied on offensive, the fort was utterly useless and therefore destroyed to save maintenance. 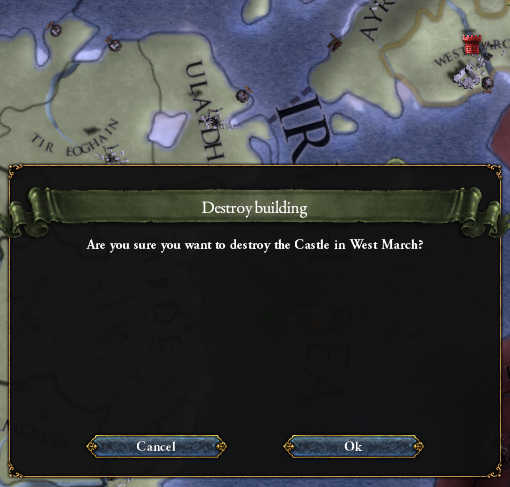 With a much weaker economical base, having a large army against Saxain required expansion elsewhere.