This time I survived the early game. So I will start writing about this run. And hopefully, this game will be a fun one.

I will try to use Irish names over the Anglicized names. Sometimes they are hard to parse, and I will include the “better known names” in parentheses.

All we have is Connacht. We are a dirt poor little country, with a unmemorable leader. But the same can be said for basically every other Irish lord. Each province produces some kind of basic goods like wheat, fish or livestock. Connacht produces livestock.

Corcaigh, better known as “Cork”, is kind of special. It has a natural harbor and produces copper.

Mide, or “Meath” in modern Irish, is the Irish way to say “middle”. It is the only grassland province in Ireland: every other province is woodland. The province was controlled by England and called “The Pale”.

Deas mhumhain, or “Desmond”, literally meaning “South Munster”, has a fort. Curiously, it was not controlled by the country called “Desmond” at the game start time. Instead, it was controlled by another country that calls itself Mhumhain. 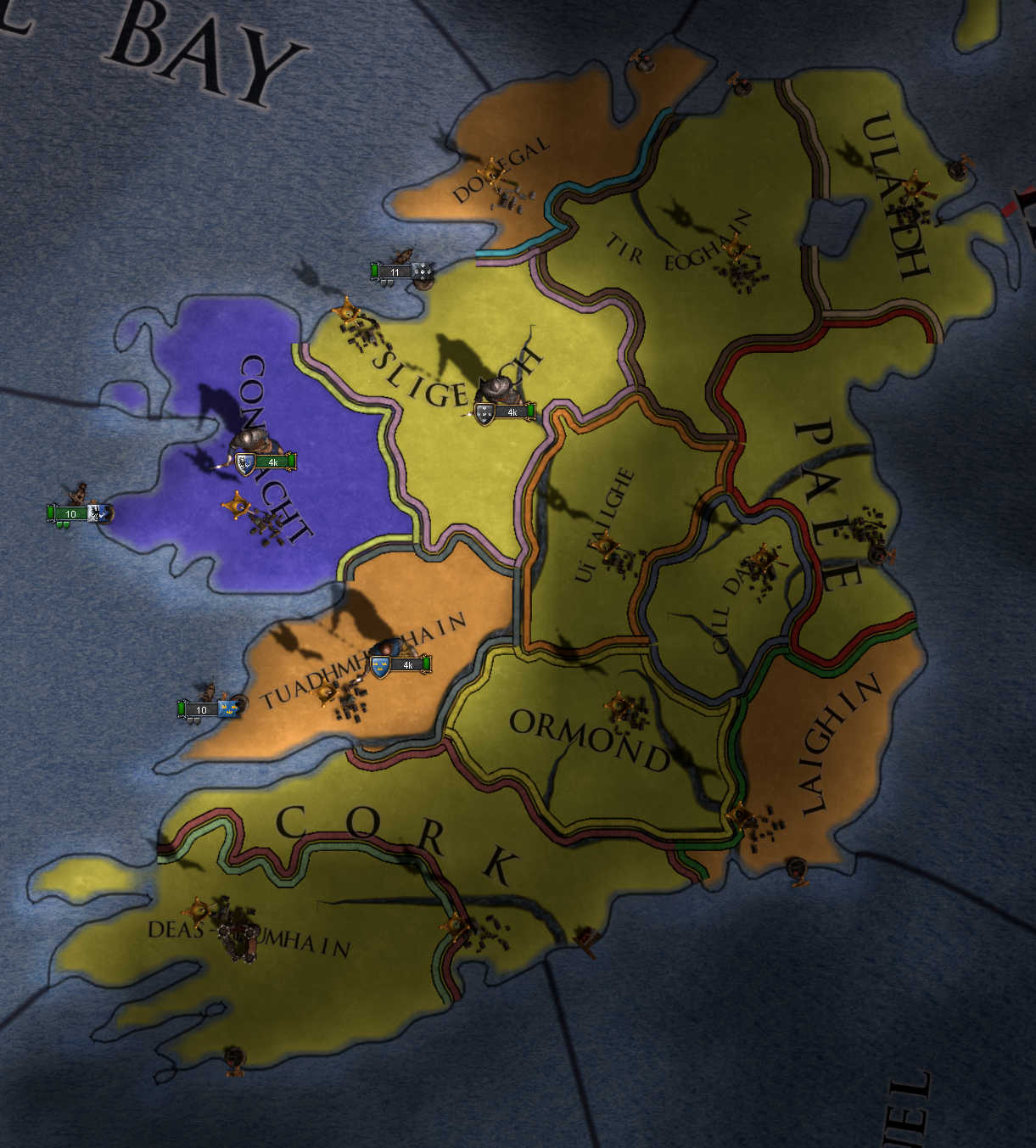 The in-game Ireland is divided into four regions: 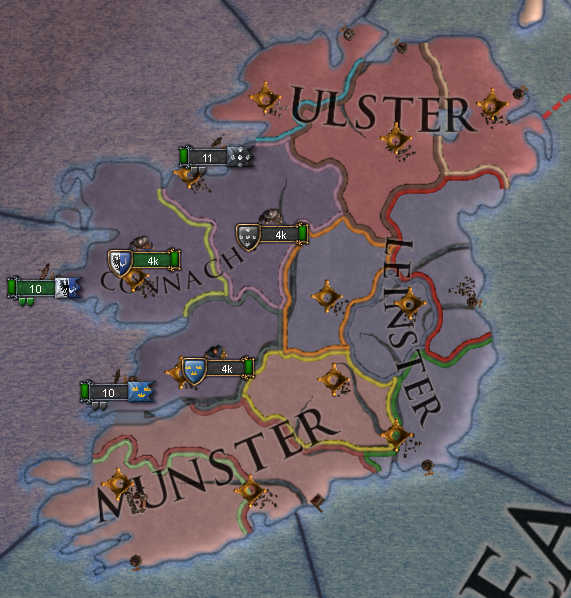 Thus, for the sake of quickly completing missions, Tuadh mhumhain and Sligeach should be priority targets.

I rivaled Tuadh mhumhain and Laighin. This ensured that I can ally Cill Dara easily. Tír Eoghain needs a royal marriage before agreeing to ally. The obvious target is Tuadh mhumhain. They are allied to nobody but Ulaidh (Ulster), which is pretty far from them.

When I declared war on Tuadh mhumhain, Ulaidh answered their call to arms but could not work out a path to move their armies. Meanwhile, Cill Dara declared a war on Uíbh Fhailí (Offaly). This allows me to march on Ulaidh after taking Inis and visiting the Cliffs of Moher.

The chieftain leads the war. He is excellent at leading archers. He is also an efficient siege leader, presumably because his archers are so well-organized that the besieged will be desperate.

Meanwhile, diplomatic efforts is spent on building relationship with the strong kingdom of Alba (Scotland). This has historical precedence: the Clanricarde did try to join the Alba side during the latter’s first independence war (1296-1328), but was defeated.

Let’s fast forward to the end of the war: 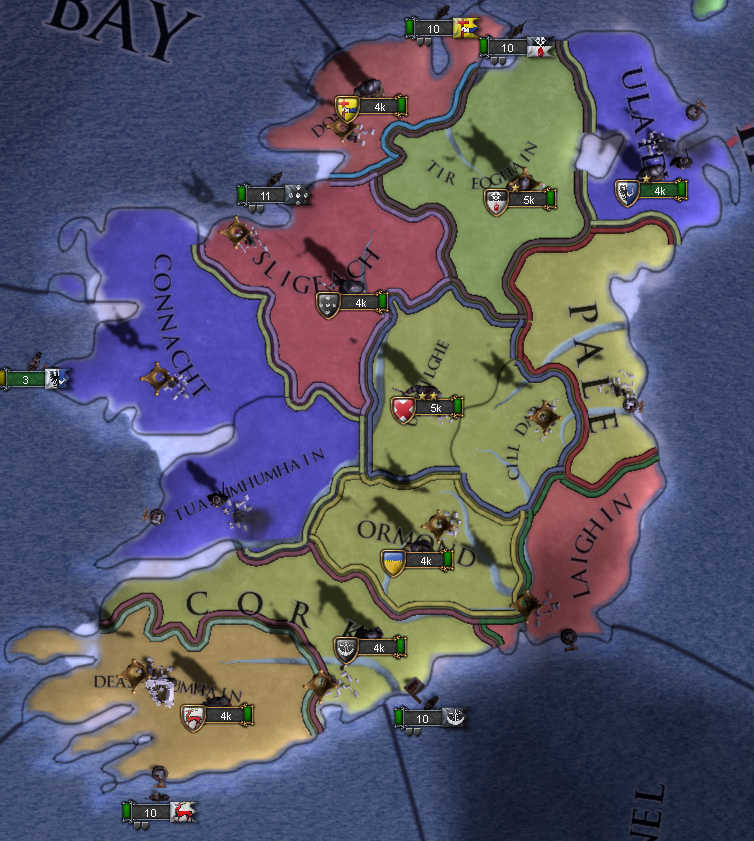 Meanwhile, the kingdom of Saxain (England) suffers from two external wars and one civil war. 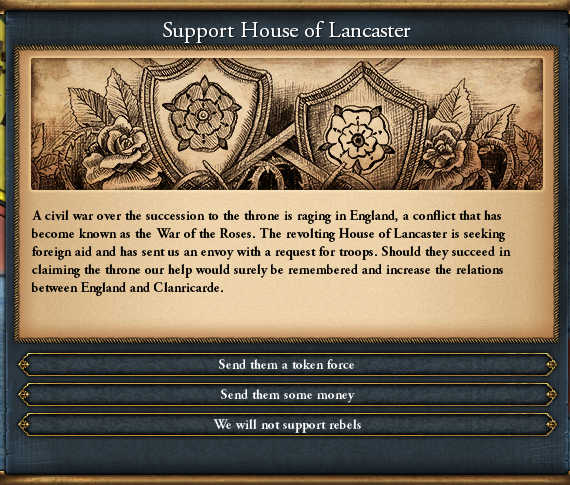 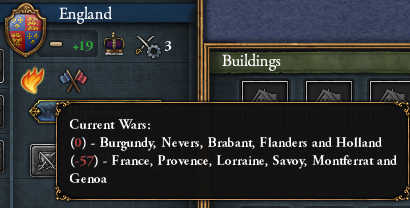 No long after Ulick Ruadh Burke had died. The harsh military life tends to be short. Thus, Mary Stuart, the Alba Queen, took the throne temporarily. During her reign, the lands of Sligeach, Dún na nGall, Laighin and Deas mhumhain (the province) were taken or under siege. The remaining Irish lands were held by Tír Eoghain, Cill Dara, Deas mhumhain (the kingdom), and Saxain. Three of the four Irish lords were allied to each other. It seemed that it would be an era of peace. 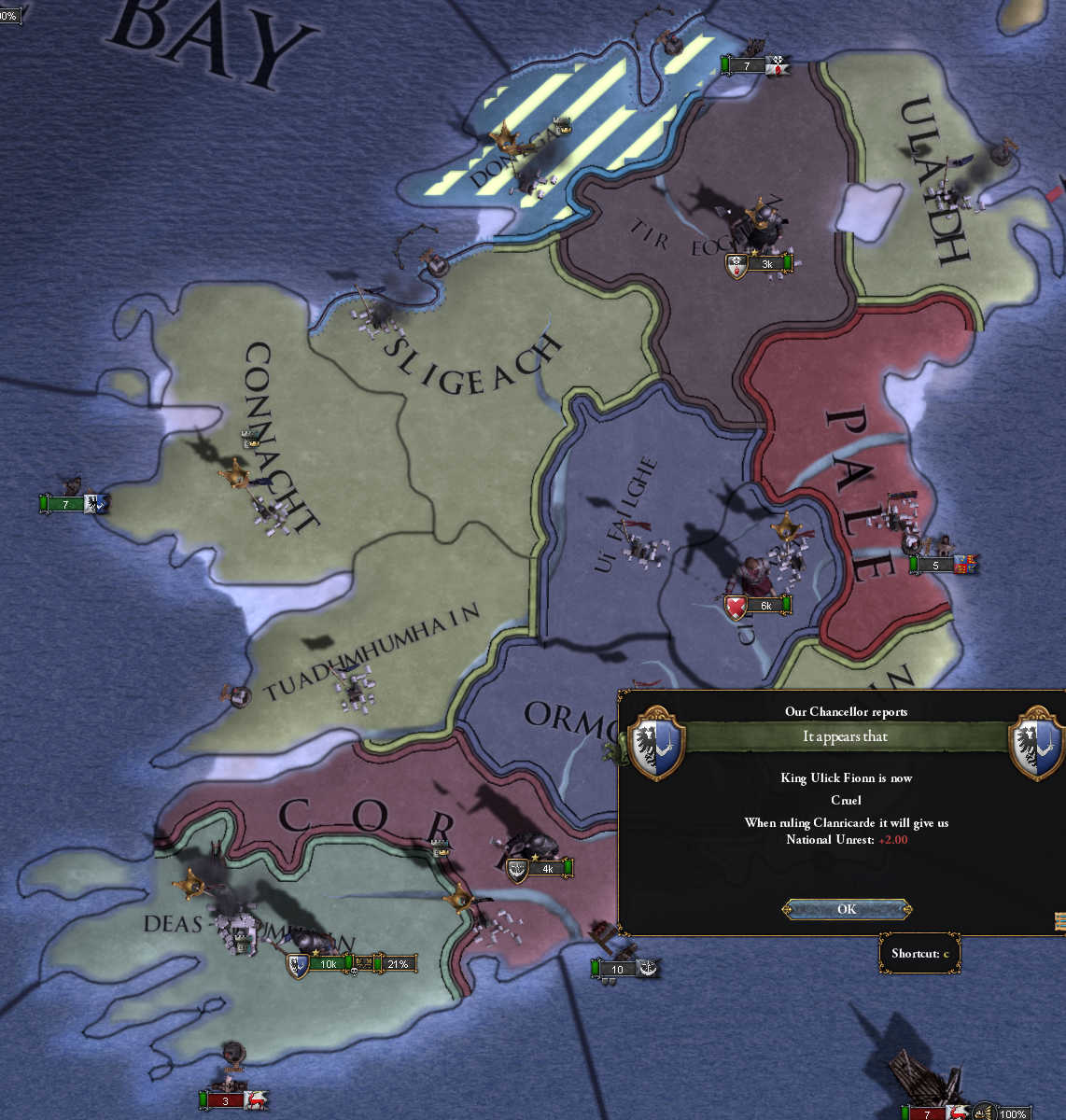 Ulick Fionn Burke, historically a ruthless leader, turned out to be cruel in our timeline. I would have preferred Queen Mary to stay in reign, but alas, she does not have the legitimacy to do so.

Meanwhile, in the land of Naples, humanity had reached a new era, the renaissance. People started to rediscover old Roman and Greek book and find new meanings from them. Never was religion the only way to look at the questions.

However, in Connacht, nothing was felt. People still live in the old way of pray and labor. Or pray and labor and war, in bad years. Connacht, or anywhere in Ireland, was too faraway and too undeveloped to feel the impact of the new intellectual movement. Queen Mary Stuart probably heard about the new ideas, since her homeland, Alba, was subtly changing.

While Connacht was busy sieging the fort of Deas mhumhain (the province), Deas mhumhain (the kingdom) and Tír Eoghain declared war on Cill Dara. Cill Dara has a bigger army than either opponent, but not both combined. After a few rounds of takeovers, the king of Cill Dara finally surrendered. 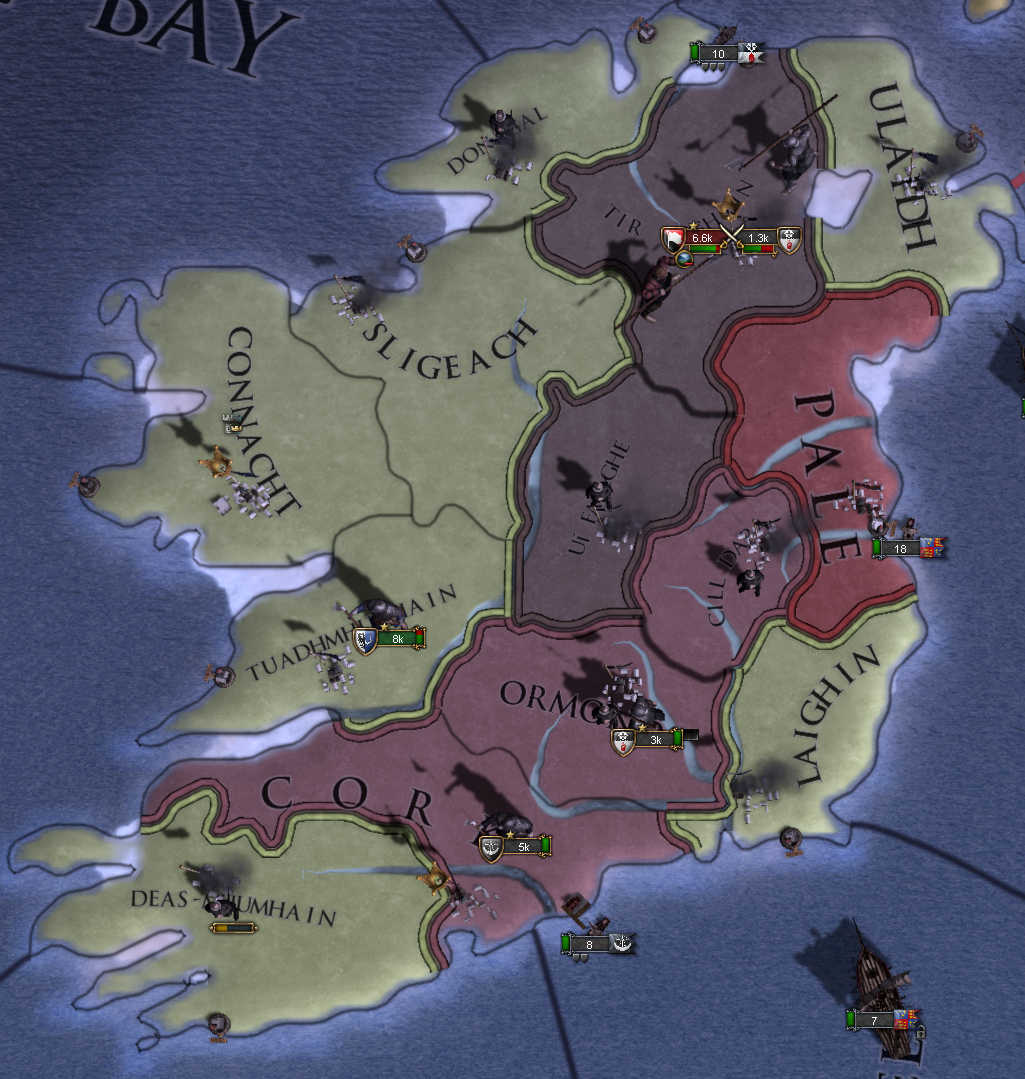 But the army of Cill Dara did not surrender. After the war, Deas mhumhain and Tír Eoghain no longer combined their force, and thus their armies were defeated by the Cill Dara army one by one. It did not take long before Cill Dara was reestablished. Ulick Fionn Burke the Cruel, with all Connacht lands under his control, had a natural claim in all Mhumhain lands. Thus, he immediately declared war using Osraige as the reason, but took Cill Dara as well.

Ulick Fionn Burke also spent lots of resources on building Connacht. As a result, the new ideas were finally spreading in Ireland. 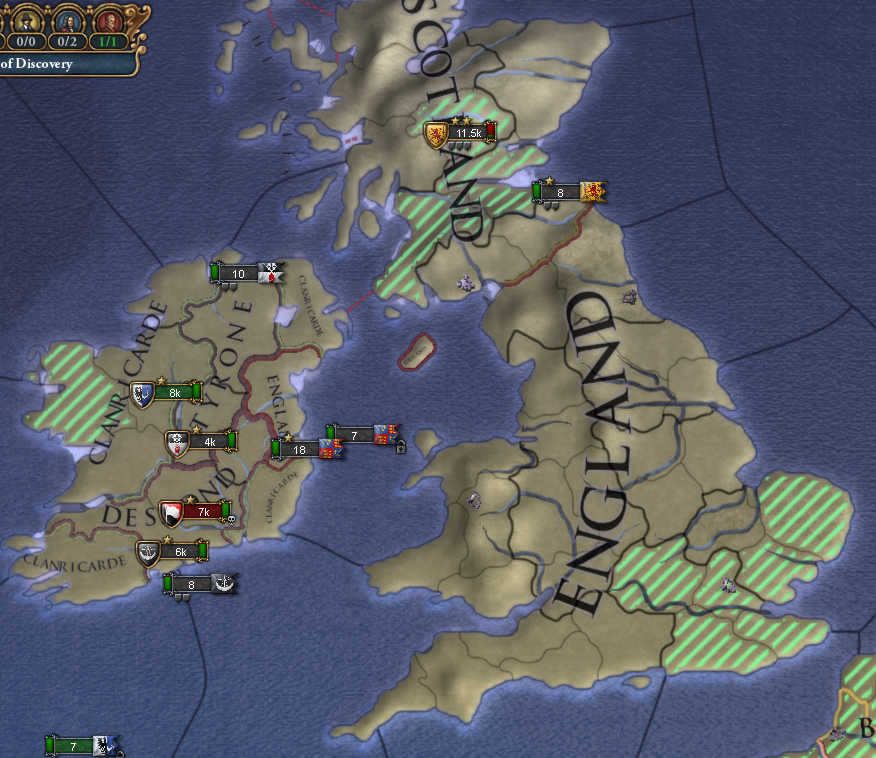 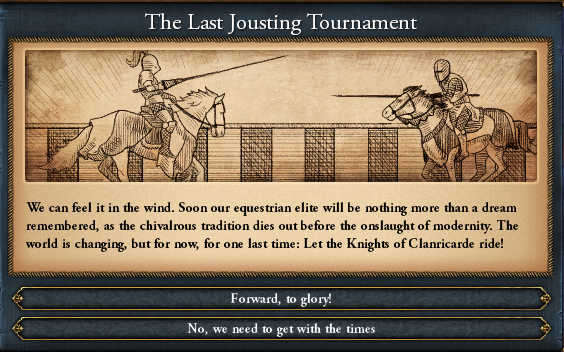 Tír Eoghain became a vassal of Saxain. Thus, the only viable target left was Corcaigh.

While Clanricarde was besieging Corcaigh, Saxain declared war on Clanricarde’s Ulaidh. The Saxain army was bigger, but Clanricarde and Alba had the advantage of being on the defensive, and the location of Ulaidh was actually awkward for the invaders to hold. 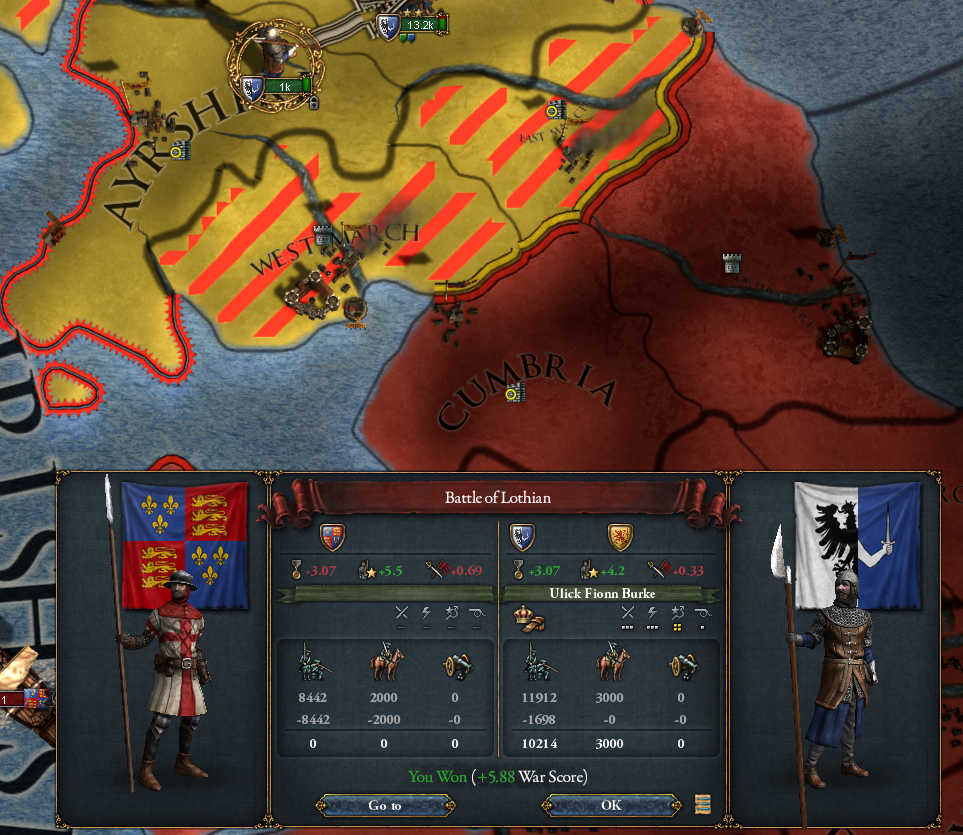 Saxain decision to siege Dún Éideann proved disastrous for them, as an rescue army led by the warlord Ulick Fionn Burke decimated their army.

Alba conceded defeat and signed a separated peace with the Saxain, ceding one province.

The situation has, ironically, become much better for the Irish side. Saxain was attacked by their old enemy, Fhrainc. And the peace treaty between Alba and Saxain made sure that they could no longer move their army via the North Channel. It gave Clanricarde good opportunity to finish the siege on Tír Eoghain and Mide. An landing offensive of 13,000 men was completely annihilated. 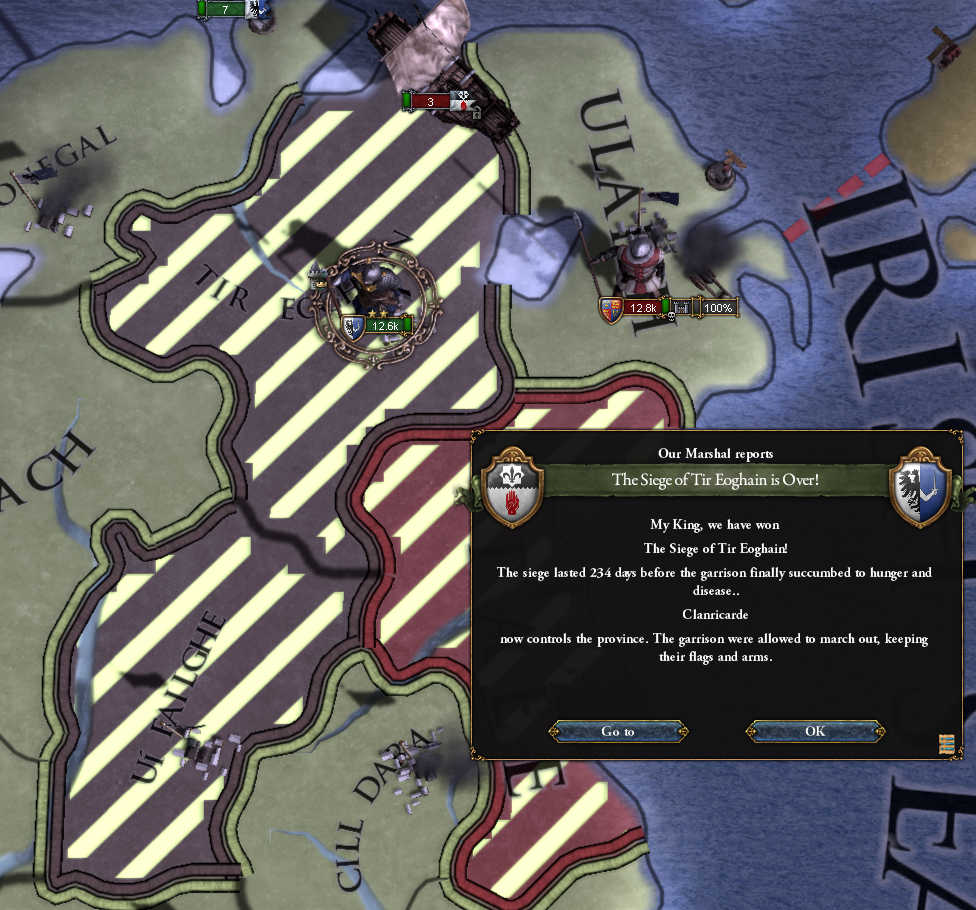 The Saxain was preparing a second landing attack when they received the peace offer from Clanricarde. Both sides were too exhausted from the war that they were happy to find a way out. 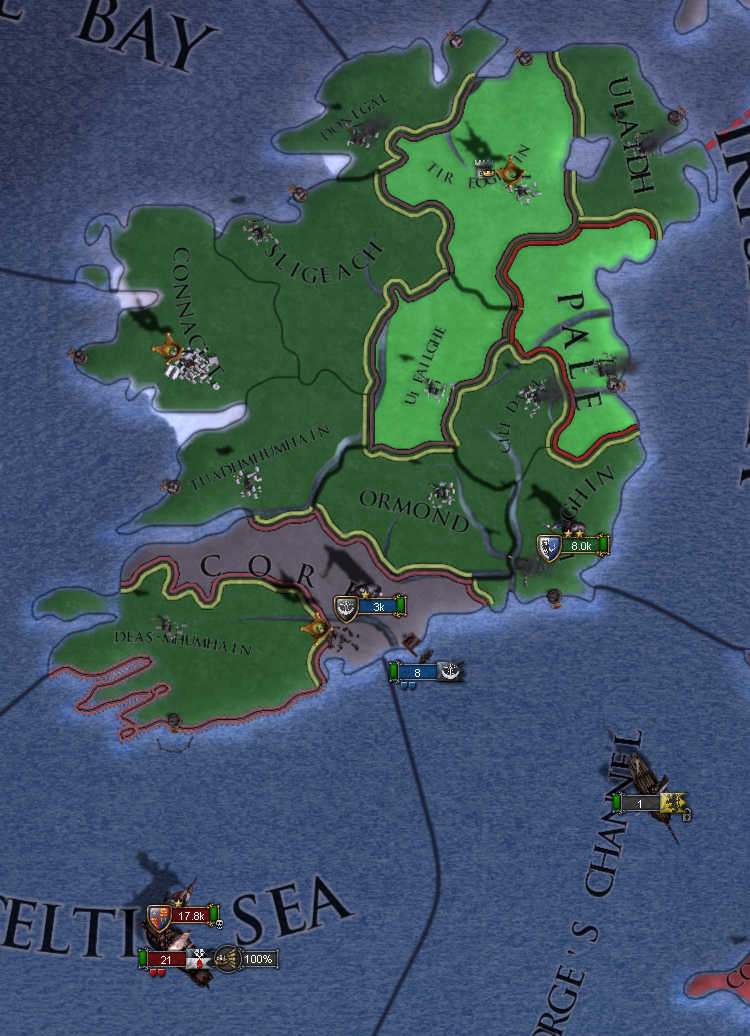 Except Corcaigh, which was under vassalage. It should be clear that eventual Irish unification was inevitable at this moment.