Since finally I bought the DLC Rule Britannia, I decide to start a new game on the island of… well, Ireland.

Clanricarde is an Irish way to say “Clan Richard”. The territory is a region around Galway. Obviously, I picked this country because I visited Galway last year.

Not every place I visited is a good place to play in EU4: Dublin is “The Pale” in the game, so playing it equals playing England. Toronto was still a land of the first people, or to be precise, the Mississaugas. The Mississaugas are not available in the game, either.

There is now a text-based introduction in the game: 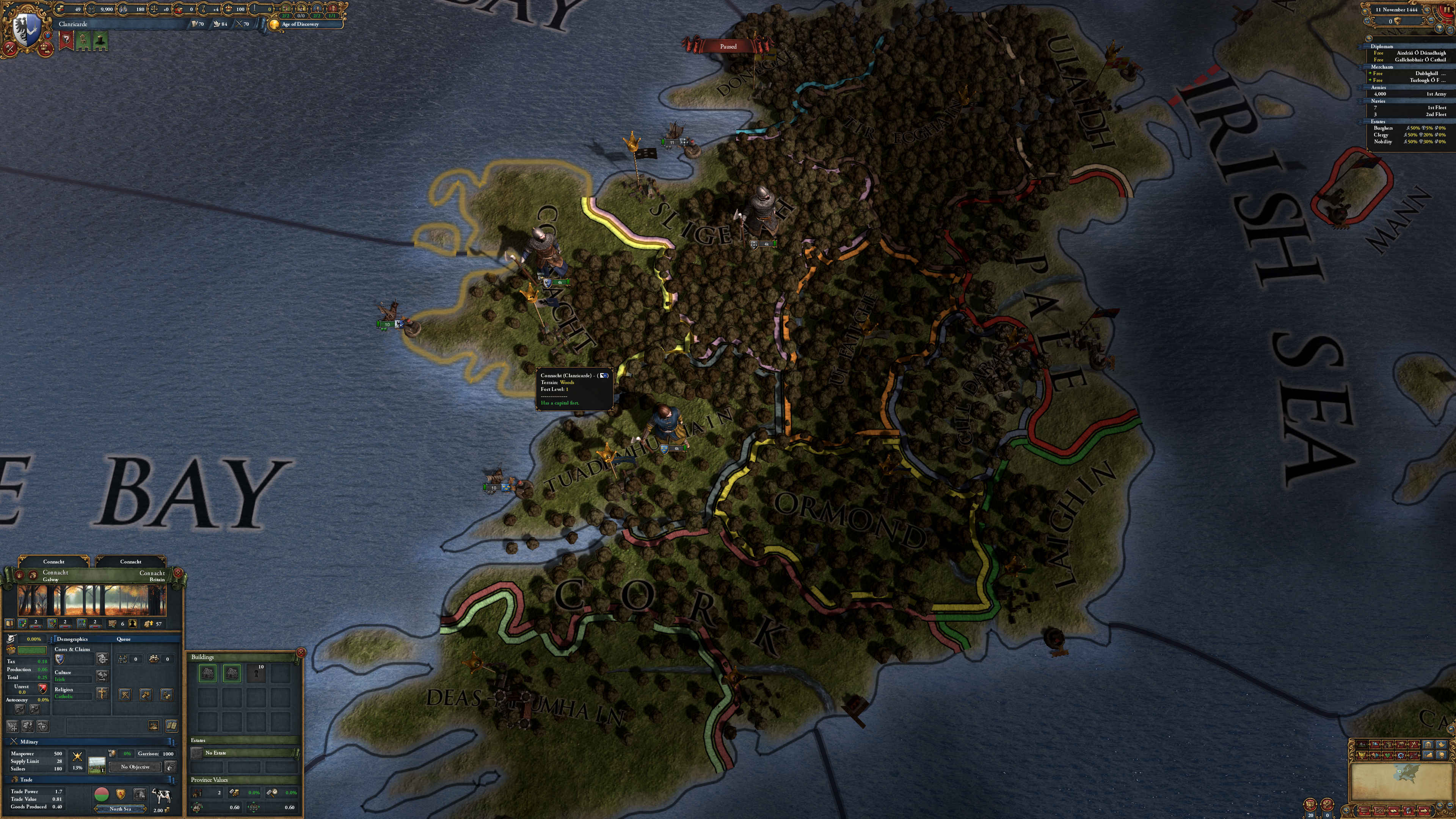 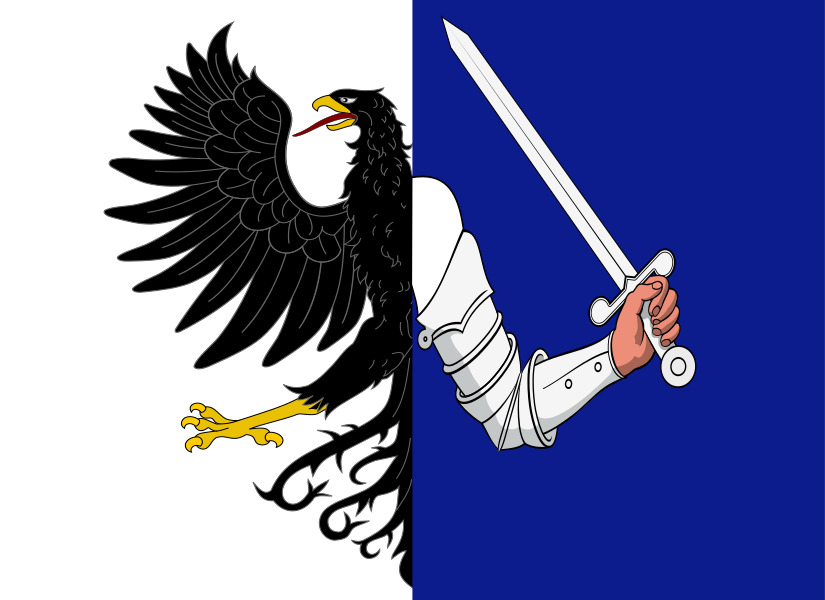 The in-game flag of Clanricarde is the flag of Connacht. It was first recorded in 1651, but there are evidences that it was used earlier.

Some sources suggest that the arm refers to the high king Ruaidrí Ua Conchobair (r. 1166-1193).

Ideas
The Fourteen Tribes
Galway city is dominated by 14 wealthy merchant families, known as the 14 tribes. Their constant competition and rivalries drive them to seek ever greater profits, and as a result Galway has become a thriving market port.
+10% Trade efficiency

By Fire and Sword
The lands of Clanricarde are controlled by many different families and factions. The rulers of Clanricarde have learned that the best way to assert their authority is through force. Villages, towns and castles burn so that the ruling family can feel secure in their power.
−15% Harsh treatment cost

People of the Sea
The lands of Connemara, on the western coasts of Connacht, are particularly poor for livestock or agriculture, but the people there have learned to make a living from the sea. Taking to the ocean in their currachs and hookers, they provide Clanricarde with a ready source of able seamen.
+25% National sailors modifier

Irish Hobbies
The harsh and hilly ground of Connemara make good breeding grounds for the Irish Hobby, a breed of horse well suited for the type of skirmish warfare employed by the Gaels.
+50% Cavalry flanking ability

To Hell or to Connacht
The warriors of Clanricarde come from some of the least hospitable lands in Ireland. To engage in a siege, long from home, holds little fear for them, for they are used to wringing sustenance from more hostile territory.
−10% Land attrition

Catholic Holdouts
No matter the lies told by the heretics of the Reformation, the people of Clanricarde will always remain loyal to His Holiness.
+2 Yearly papal influence

The Lord Presidency
The establishment of the position of Lord President of Connacht helped to bring order to the lands of Clanricarde. Whereas previously disputes between prominent families resulted in raids and feuding, now the Lord President acted as a neutral arbiter.
−10% Stability cost modifier

The basic theme is devout Catholics, harsh lands and tribal politics. They resonate so much with what I say in Connemara and Galway.

Oh, and by the way, it is one of the last few Gaeltachtaí-concentrated regions in the world. Gaeltacht means “Irish-speaking region”, and indeed, I have heard much more Irish in Galway and Connemara than in Dublin.

I guess my game plan will not involve culture switch, national idea switch or religion switch. They are so essential for the Connacht identity.

Having not played EU4 for quite some time, there are some new systems for me to grasp. The revamped mission system is one of them. 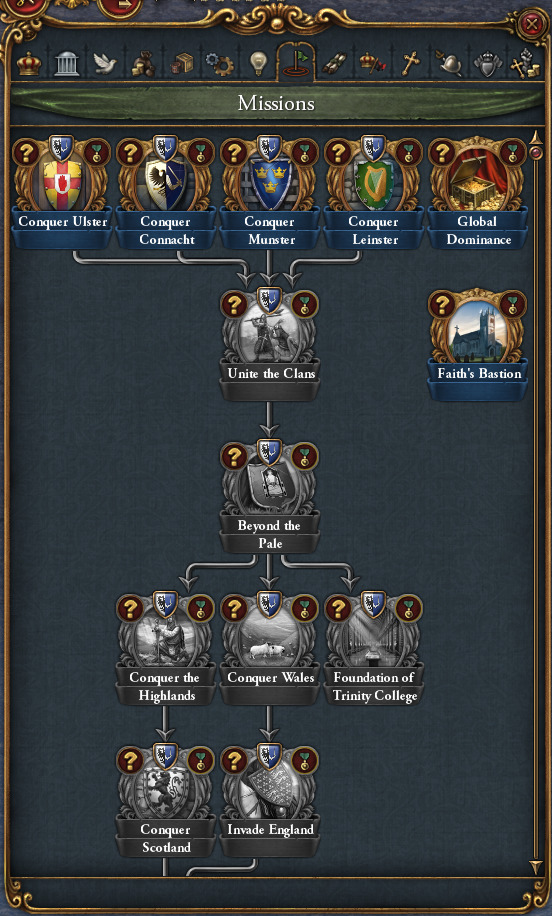 Fortunately, the first four available missions are just about conquering each of the four Irish regions in the game. Fully controlling one region gives claims on all neighboring regions, making snowballing much faster. 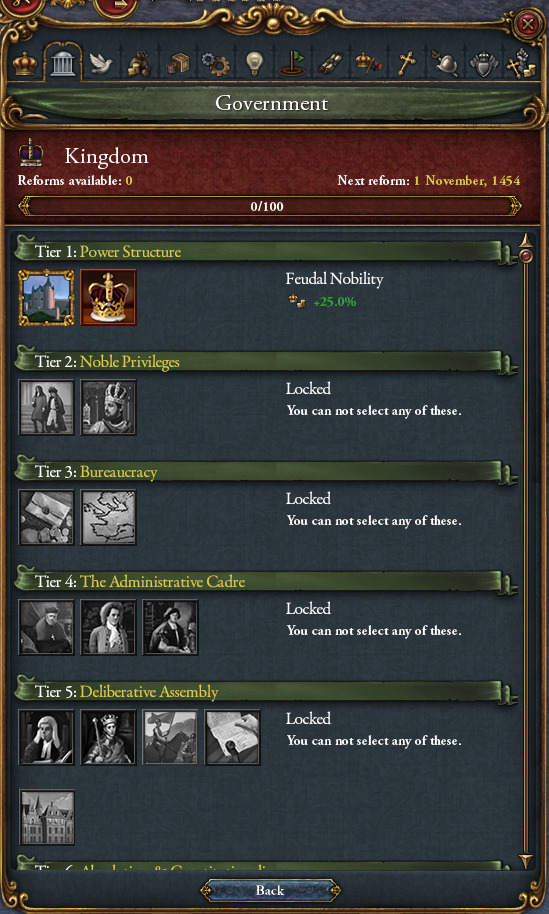 Government reforms are another system that I have not touched before. But there is not much I can do at the start of the game. The only option I have is to degrade my government into a despotic one. The upside is to reduce Aggressive Expansion for unjustified claims, but the downside is a whopping 10 corruption. I guess it is a pretty expert mode option… 10 corruption is a lot.

I actually started the game but was basically defeated in two hours, so for now I only write about the basics. An observation from my first game is that the Irish politics is heavily influenced by England and Scotland. Having a safety net of four “strong” allies does not really help much if my country angers Scotland or England. They should be priorities after securing quick alliances.

The mission to do is obviously the “conquer Connacht” one. Ironically, the missions do not help at all with conquering your first region: the free claims only kick in after finishing one of the missions.