Having played three games in Food Chain Magnate, I would announce that it is my new favorite board game, or, at least one of them. 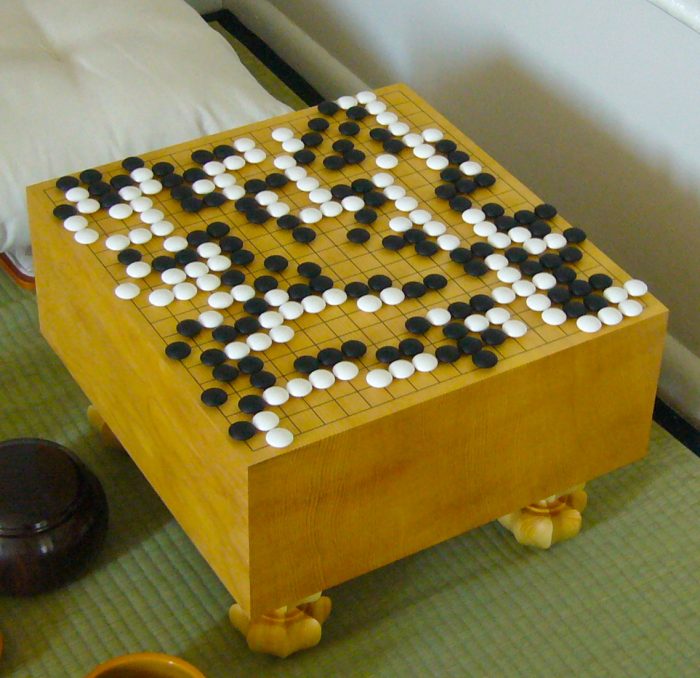 There are many different versions of the third clause, and different conventions used in actual games, but that’s beyond the point. What is interesting is the second clause, which is so simply explained in a graph theory terms.

Such is the charm of the concept of connectivity. It is easily understood by all players of all ages. It is, on one hand, so abstract in nature, but on the other hand, super intuitive and graphical.

And in the scene of modern, European-style board games, we have Carcassonne as a probable forerunner. 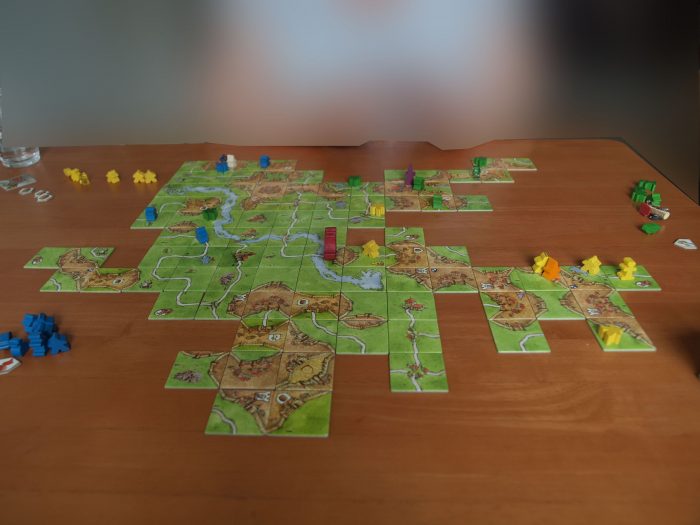 The game, if you have not played before, can be introduced shortly and with great simplification:

Players take turns in placing randomly drawn tiles and workers. They get score by finishing castles (connected components), roads (paths with both ends defined, or loops), cloisters (a tile and all adjacent tiles), and getting extra score by owning pastures adjacent to finished castles.

Again, the concept of connectivity plays a very central role in this game. Part of the fun is to find creative ways to attach an extra tile to a half-finished castle or merge pastures in unexpected ways.

In some sense, I would even say that the point of bothering about boards is connectivity in the graph theory sense. It is something that cannot be replicated with cards, dice, whatever.

A sub-genre of modern board game feature the lack of randomness. Or, if we use positive nouns, I would say “determinism”. It means there is no deck shuffling, dice rolling. For classical board games like Chess and Go, this is basically taken for granted.

However, modern (non-abstract) board games, while offering more themes and more different ways of interaction between the players, rarely take the deterministic option. The reasons might be manifold:

However, I think I should determine between three flavors of randomness:

The first two flavors should be self-evident. The third flavor, however, is a bit hard to understand. However, one might examine Rock-Paper-Scissors: the game has no explicit rules for randomness, however, since it involves simultaneous decision, the players have to “create” some randomness out of nothing in order to maximize their winning chance — or rather, minimize the risk their opponent notices their pattern and beats them.

Usually, the games without explicit randomness tend to be deeper and more serious.

Caylus is an example of a game featuring absolutely no randomness. Unfortunately I have not played it before.

Dominion, another game I love, features two kinds of randomness: set up randomness gives each game a completely different board, then explicit randomness (in the form of shuffling) asks the players to adapt their strategy to their luck in draws.

A example with a game featuring set-up randomness but not the other two kinds of randomness is Terra Mystica. 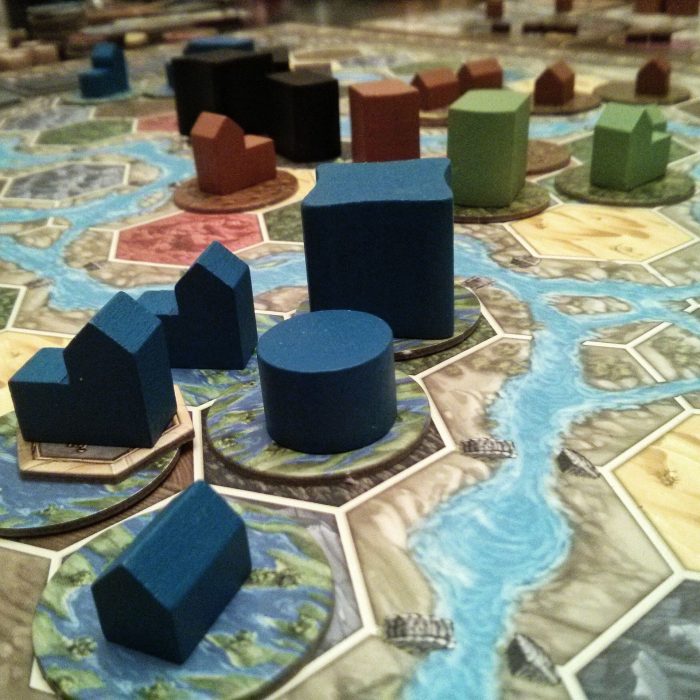 In this building game, each round the player is provided a mana pool and a huge array of options. Players take turns to execute one action out of a very long list of permissible actions. But what makes it very tight and deep is that many actions can be taken only once per round; while other options can be taken only once per game. Needless to say, there are many thinking revolving around the valuation of each option. If one desperate needs an option but correctly reads that the opponent does not need that option at all, he might be able to take it later than his instinct tells him so.

The set-up randomness causes each game to have slightly different scoring goals and different list of options available.

It all worked well. Set up randomness ensured each game would be different.

Still, I always wanted to be able to play the game on randomized maps. Unfortunately, it never happens. Even its evolution, Gaia Project, while featuring modular maps, still does not come with an official way to randomly generate playable maps.

Now let me talk about that game. 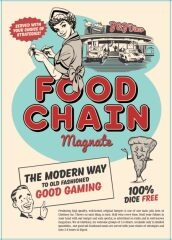 Thematically, it is the manifestation of pure and raw capitalism. You are for profit. The game is all about money. You run a restaurant company, hire interns to save cost, run advertisements to create spurious demand, then supply food and drinks to such created demands for profit.

Mechanically, the game starts with a randomly generated map, and players take turns placing their initial restaurant. The random map is borderline between “connected” and “not connected” — usually most places are connected but often via contrived connections. Sometimes there are simply two or more connected components. In other words, the density of edges seems to have been carefully chosen so that the connectivity of the resulting maps have the maximum variety.

After the initial placement, each player vote how long the game will last — however the vote result is not immediately revealed.

Players have a number of employees at any time of the game. Of course, they stat with no employees. Each employee can be fired, put to work or in vacation.

I am not going to detail in how each action means. However, we can clearly see that the game features two kinds of implicit randomness: in the voting process, and in the simultaneous decision in each round. The voting process has the extra property that it is a hidden information generated by players that would only be revealed in later stages of the game.

In practice, these decisions often do matter. For example, waitresses do not have great use, but the player featuring more waitresses in work wins the “waitress battle”. Similarly, discounts work the best if you put just enough discount to “win over” all the customers that could have gone either way. Sometimes the order of the turns matters the most, but having too many vacancies hurts, so one prefers beating their opponent with just one more vacancy.

In each of these cases, the Nash equilibrium is a mixed strategy. Just like the classical example of Rock-Paper-Scissors, this game creates randomness from nothing. However, since all the randomness is generated by players, it feels more natural than the “enforced randomness” in the more explicitly random kinds of games.

Furthermore, the game features many milestones. If the game itself is a parody of the capitalism world we all live in, the milestone system is a parody of all the “achievement” system in video games we all play. A milestone will be rendered unreachable at the end of the round someone reaches it.

Anyway, one of the milestone has particular game theory interest, as it says “if you reach $20, you can peek at the voting result”. It puts another twist to the voting process: you can’t change the voting result with that milestone, but you get the hidden information earlier than other players. There is, technically, no inherent randomness in the hidden information, but it could still hold considerable sway in the game strategy.

I wish I have highlighted why I love this game. In addition to its lovable complexity and it being generally well-designed, it features a rare combination of set-up randomness and implicit randomness. Furthermore, the random set-up process involve putting together a map with randomly drawn and randomly rotated tiles. The inherent beauty in connectivity makes each map unique and provide a different challenge for the players.